Spirasi marks its first pride as Dublin Pride kicked off in city center, celebrating diversity with thousands of people on the streets.

Jadon Yang, who interned with Spirasi over the Summer of 2019 reflects on Spirasi's participation at Pride 2019.

Dublin Pride is one of Ireland’s biggest (and certainly the most colorful) events of the year. On the 29th of June, 2019, Dublin city center was showered with rainbows and glitter as the parade kicked off on O’Connell Street and ended in a huge outdoor celebration at Merrion Square. This year’s theme was “Rainbow Revolution,” commemorating the 50th year anniversary of the 1969 Stonewall Uprising in New York, which rippled into a worldwide Pride movement. As thousands of people marched in the 2019 Dublin Pride Parade on Saturday (29th June), painting streets in colors of the rainbow, a group of people from Spirasi was among the long line of community groups waving at the crowd. Though having participated in last year’s pride parade with another refugee organization, this is the first time clients and staff are marching independently as a group representing Spirasi: 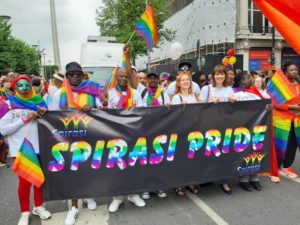 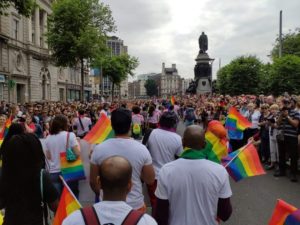 Homosexuality is still considered illegal and can result in criminal charges in many countries. The cultural environment where some asylum seekers come from often heavily stigmatizes homosexuality and different gender identities. LGBTQ+ asylum seekers are one of the most vulnerable group attending Spirasi’s services, having been persecuted in their home country due to their sexual orientation and gender identity, and often continuing to face discrimination by fellow asylum seekers and refugees in Direct Provision Centres after arriving in Ireland.

Living in Direct Provision is difficult for all asylum seekers, but being LGBTQ+ adds another layer of stress and vulnerability. LGBTQ+ asylum seekers often live in fear of being outed, being a target of violence, or being humiliated and avoided by other residents. Life can be very tough for them. That’s why Spirasi is working hard to create a safe and inclusive space, celebrating diversity while letting clients understand there is no shame to who they are. Be proud! 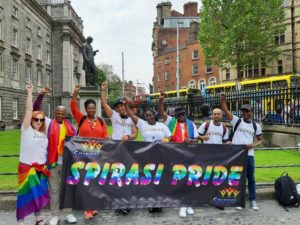 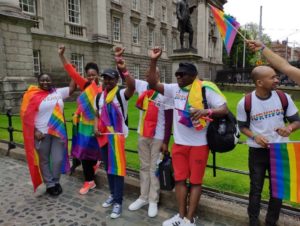 Dublin Pride ended in a big outdoors party at Merion Square with a live concert and speeches from various LGBTQ+ activists. The Spirasi group paraded across River Liffey into the park and sat around enjoying the sunshine and festivities.  Positive vibes were felt by all with some clients saying they had a great time attending the Pride Parade. We hope to see more people participating in Pride next year! 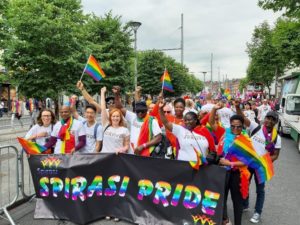 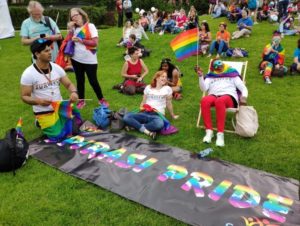