Máirtín Ó Maoláin, Examining Physician for Spirasi, talks about his experience of working with torture survivors. 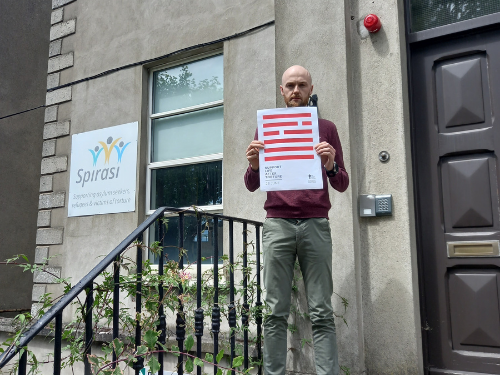 The pain is persistent and malignant, present since they suffered what most of us here in Ireland believe is unthinkable and unimaginable in reality – a horror of humanity banished to our histories and only displayed in literature or film – torture. Torture, as defined by the UN, is a specific type of pain or suffering that is inflicted by; at the instigation of; or with the consent or acquiescence of a public official or person acting in an official capacity. It may be physical or mental. According to the UN definition it may be done in the pursuit of information or a confession; it may be a punishment for an act that someone has committed or is suspected of having committed; or it may be used to as tool for coercion, intimidation or discrimination. In reality it may be perpetrated by police or army members; those with political connections; or radical militant groups who have become the de facto authority in an area; among others.

Our clients have fled their home countries in mortal fear and in deep desperation. They have suffered brutal acts of senseless violence, exacted upon their bodies and their minds. They have been made to feel less than human and undeserving of compassion. The reasons given range from an affiliation with a political group; belonging to a certain ethnicitiy; being LGBTQ; or being accused of an offence. They have escaped, seeking support and protection here, as this cannot be found where they are living. Sometimes they have suffered further violence or trauma on their journey from their home countries to Ireland.

Many have physical remnants of this cruel inhumanity, in the form of scars, missing digits or lost teeth. They are reminded of what was done to them each time they look in the mirror, bathe themselves or change their clothes. Others were infected with HIV during their torture and must receive lifelong treatment to manage this. They do not need these physical reminders, however, as many are constantly reliving the memories that have festered, in the form of intrusive thoughts, flashbacks or vivid nightmares.

Sometimes the clients we meet describe their experiences of watching their family members or friends being tortured or murdered. Some have not heard from relatives since they helped the client escape, and have no way of making contact. Others are luckier, and have a family that is alive, but they have no way of reuniting with them, while they remain in the international protection (asylum) process. The isolation, grief and crushing sadness stemming from these forms of separation from one’s family are often one of the most pressing issues for our clients.

What our clients describe in relation to their experience in the international protection (asylum) process reflects a shameful perpetuation of their trauma. A system in which they are powerless and have no choice when it comes to where the live, and often what they can eat. A system in which the uncertainty they have about their future can last for years. A system that can stagnate their progress and their integration into Irish society. Some clients describe being forced to move from one end of Ireland to another, without consideration for the social connections they have made, or the local health services with which they are engaging. Just as they are settling, they are removed, left to find stability and belonging elsewhere.

I usually meet torture survivors when they first interact with our service, along with my psychosocial team colleagues. This meeting is usually the first time that they have been given the time and space to talk about how they are feeling and how they are coping. The descriptions I gave at the start of this piece are examples of some of the common reactions I see during these important interactions. This time and space, in combination, with sincere compassion and respect, is the first step of many, in their rehabilitation. Oftentimes, despite the issues and stories I hear, as referenced above, I sense a flash of hope in a client, as we finish that initial meeting. They usually express that they have felt heard and seen. They realise that they are not alone and trust that we, as a service, are there to support them and help them in their recovery.